Macbeth and Romeo and Juliet in Waterworks Park — for free!

News from TampaRep:  Welcome to the Tampa Shakespeare Festival

Today is a wonderful day for theatre in Tampa, and we want to help out by bringing as much attention as possible to the new Tampa Shakespeare Festival.  Yes, starting this evening, you can see Shakespeare for free in the beautiful surroundings of Water Works Park.  The Festival brings two productions playing in repertory — Macbeth and Romeo and Juliet.  You have six chances to see each — so pack a picnic, bring a folding chair or blanket, and enjoy some outdoor theatre.

We’re glad to have the opportunity to promote the Festival — and also to brag about the many connections to TampaRep.  For starters, Dan Granke, the director of Macbeth, just finished staging TRT2’s successful production of Bethany.  And Megan Lamasney, who’s guiding R&J, directed Alcestis, TampaRep’s very first production.  We’re happy to say that both will be back with TampaRep next season — Megan directing, and Dan acting (and possibly directing, again, for TRT2).

But the connections don’t stop there.  Having triumphed as Hamlet in TampaRep’s production, Jack Holloway now attacks the title role in Macbeth. Gi Young Sung, who also appeared in Hamlet, has designed costumes for both productions — and she’s designing them for our upcoming production of Betrayal, as well.  There are more connections, too, from cast members to crew — but even without those connections, we’d be happy for this exciting venture, and we’re looking forward to seeing the shows. 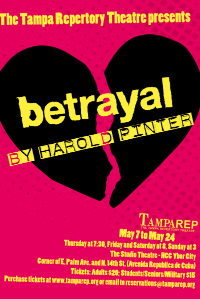 Speaking of Betrayal, we’re just over two months away from opening.  We’ve got a great production team working already — joining Gi Sung are scenic designer Kristin Kochanik, lighting designer Mike Wood, and sound designer Matt Cowley.  The cast includes Ned Averill-Snell, Emilia Sargent, and Greg Thompson — that’s a group you won’t want to miss. According to one of the original reviews, Betrayal (by Noble Prize-winning playwright Harold Pinter) “is an exquisite play, brilliantly simple in form and courageous in its search for a poetry that turns banality into a melancholy beauty.” It traces the relationships among three people — the married couple, Robert and Emma, and the best friend, Jerry.  Starting in 1977, the story rewinds to 1968, a rare chance to see where the characters came from while knowing where they end up. It’s a play full of wicked humor to accompany that melancholic beauty. The production sees us back in the Studio Theatre at the Ybor City campus of Hillsborough Community College. It opens on May 7th. Tickets are on sale now on our website, and you can still pick up a FlexPass or a FlexPass mini — the best way to see the play with friends. 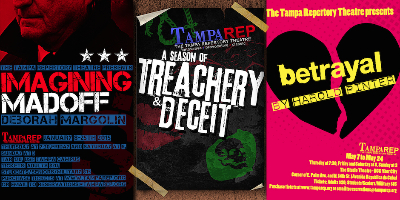 Even as we’re working on Betrayal, we’re closing in on announcing our next season — our fifth!  It’s hard to believe the time’s gone by so fast.  This year has been a great success so far — Imagining Madoff generated more revenue and bigger audiences than any previous production — and we’re counting on Betrayal doing even better.  This year saw us trying out two new venues — the Smith Black Box at the Tampa Preparatory School and Studio 120 at USF.  We’re happy to announce that our fifth season will take place in both of those spaces — two shows in the Smith Black Box and two in Studio 120.  Yes, we’re moving to four productions, and a season of American Visions — plays that span from 1934 to 2011 and provide four very different slices of American life.  We’ll be announcing the titles when Betrayal opens, but we’ll keep dropping hints over the coming weeks.

We’ve come a long way since Megan directed Alcestis, and we plan to go even further.  To do so, we need your continued help and support.  Come out to Betrayal — and bring a friend, someone who hasn’t been to the theatre.  If you have the time, think about becoming a TampaRep volunteer — just contact Jeanne Adams, our Coordinator of Volunteers (you can see her in the Shakespeare plays, as well) and let her know how you’d like to help — as an usher or box office staff, on sets or costumes, or on the business side.  If you’re planning on shopping online, think about Amazon Smile — for every purchase you make, a small amount comes to us.  And, of course, if you can, please become a donor to TampaRep.  Just go to our Donation page and choose a category (and the perks that go with it).Whichever you do, we’re grateful to you — and you’re helping us in our quest — to make theatre that’s innovative, provocative, and classic.